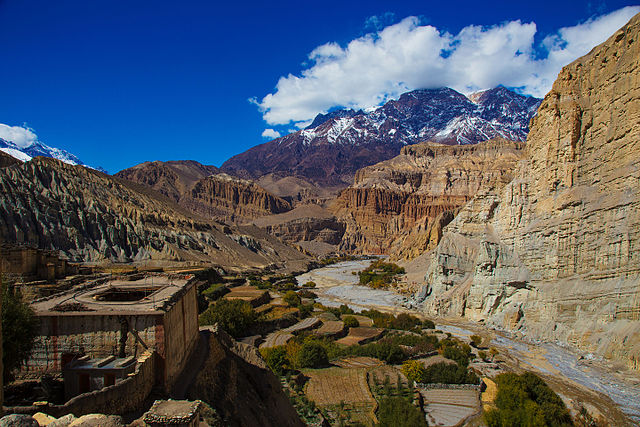 National winners of WLE Nepal showing us stunning mountain landscapes and a lot of space on their photos.

The Langtang National Park is the fourth national park in Nepal and was established in 1976 as the first Himalayan national park. The protected area exceeds an altitudinal range of 6,450 m (21,160 ft) and covers an area of 1,710 km2 (660 sq mi) in theNuwakot, Rasuwa and Sindhulpalchok districts of the central Himalayan region encompassing 26 Village Development Committees. It is linked with the Qomolangma National Nature Preserve in Tibet. The high altitude sacred lake of Gosainkundafalls within the park. The Gosainkunda lake (4,300 m (14,100 ft)) and the Dorje Lakpa range (6,988 m (22,927 ft)) bisect the park from east–west to south–east. The summit of Langtang Lirung (7,245 m (23,770 ft)) is the highest point in the park.

The northern and eastern border of the national park coincide with the international border to Tibet. The western boundary follows the rivers Bhote Kosi and Trisuli. The southern border lies 32 km (20 mi) north of the Kathmandu Valley.

Rhinoceros often abbreviated as rhino, is a group of five extant species of odd-toed ungulates in the familyRhinocerotidae. Two of these species are native to Africa and three to Southern Asia.

Members of the rhinoceros family are characterized by their large size (they are some of the largest remaining megafauna, with all of the species able to reach one tonne or more in weight); as well as by an herbivorous diet; a thick protective skin, 1.5–5 cm thick, formed from layers of collagen positioned in a lattice structure; relatively small brains for mammals this size (400–600 g); and a large horn. They generally eat leafy material, although their ability to ferment food in their hindgut allows them to subsist on more fibrous plant matter, if necessary. Unlike other perissodactyls, the two African species of rhinoceros lack teeth at the front of their mouths, relying instead on their lips to pluck food.

Rhinoceros are killed by humans for their horns, which are bought and sold on the black market, and which are used by some cultures for ornamental or traditional medicinal purposes. East Asia, specifically Vietnam, is the largest market for rhino horns. By weight, rhino horns cost as much as gold on the black market. People grind up the horns and then consume them believing the dust has therapeutic properties. The horns are made of keratin, the same type of protein that makes up hair and fingernails. Both African species and the Sumatran rhinoceros have two horns, while the Indian and Javan rhinoceros have a single horn.

The IUCN Red List identifies three of the species as critically endangered.

Phewa Lake, Phewa Tal or Fewa Lake is a freshwater lake in Nepal located in the south of the Pokhara Valley that includesPokhara city; parts of Sarangkot and Kaskikot. The lake is stream-fed but a dam regulates the water reserve, therefore, the lake is classified as semi-natural freshwater lake. It is the second largest lake in Nepal, the largest in Gandaki Zone followed by Begnas Lake. Phewa lake is located at an altitude of 742 m (2,434 ft) and covers an area of about 5.23 km2 (2.0 sq mi). It has an average depth of about 8.6 m (28 ft) and a maximum depth of 24 m (79 ft).

Maximum water capacity of the lake is approximately 43,000,000 cubic metres (35,000 acre·ft). The Annapurna range on the north is only about 28 km (linear distance) away from the lake. The lake is also famous for the reflection of mount Machhapuchhre and other mountain peaks of the Annapurna and Dhaulagiriranges on its surface. The Taal Barahi Temple is situated on an island in the lake.

Mount Everest, also known in Nepal as Sagarmāthā and in Tibet as Chomolungma, is Earth’s highest mountain. It is located in the Mahalangur section of the Himalayas. Its peak is 8,848 metres (29,029 ft) above sea level. It is not the furthest summit from the center of the Earth. That honour goes to Mount Chimborazo, in the Andes.[8] The international border between China andNepal runs across Everest’s precise summit point. Its massif includes neighboring peaks Lhotse, 8,516 m (27,940 ft); Nuptse, 7,855 m (25,771 ft) and Changtse, 7,580 m (24,870 ft).

In 1856, the Great Trigonometrical Survey of India established the first published height of Everest, then known as Peak XV, at 29,002 ft (8,840 m). The current official height of 8,848 m (29,029 ft) as recognized by China and Nepal was established by a 1955 Indian survey and subsequently confirmed by a Chinese survey in 1975. In 1865, Everest was given its official English name by the Royal Geographical Society upon a recommendation by Andrew Waugh, the British Surveyor General of India. Waugh named the mountain after his predecessor in the post, Sir George Everest, arguing that there were many local names, against the opinion of Everest.

The Sagarmāthā National Park is a protected area in the Himalayas of eastern Nepal that is dominated by Mount Everest. It encompasses an area of 1,148 km2 (443 sq mi) in the Solukhumbu District and ranges in elevation from 2,845 m (9,334 ft) to 8,848 m (29,029 ft) at the summit of Mount Everest. In the north, it shares the international border with the Qomolangma National Nature Preserve of Tibet and extends to the Dudh Kosi river in the south. Adjacent to the east is the Makalu Barun National Park.

The protected area has been identified as an Important Bird Area by BirdLife International and is included in the Sacred Himalayan Landscape.