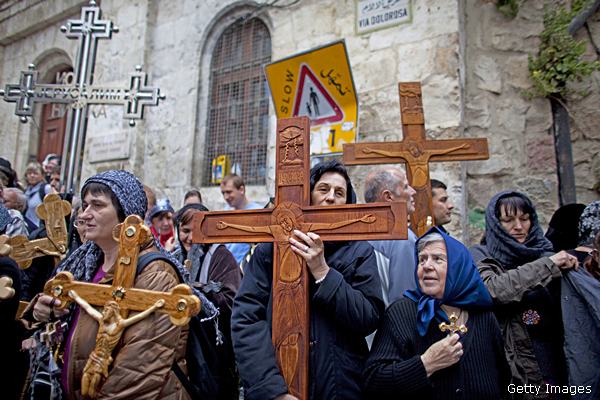 Most of the religious Western World (North America, Europe, and Oceania) follows this monotheistic religion based on the Bible. Above, Christian pilgrims carry wooden crosses along the Via Dolorosa during the Good Friday procession on April 22, 2011, in Jerusalem, Israel. Thousands of Christians around the world on that day marked Good Friday, which is when Christians commemorate the crucifixion of Jesus Christ. In Jerusalem, Christian pilgrims took part in processions along the route that Jesus is believed to have taken in his last days as he carried the cross.

Islamic pilgrims perform the walk around the Kaaba (Tawaf) at the Grand Mosque in the Saudi Arabian holy city of Mecca on Nov. 9, 2010. The Kaaba, Islam’s most sacred sanctuary and pilgrimage shrine, which stands in the heart of Mecca’s Masjid Al-Haram mosque, contains the holy Black Stone believed to be the only piece remaining from an altar built by Abraham. Pilgrims try to touch and kiss the Black Stone and the door of the Kaaba.

“Islam” literally means “submission to God” and the Quran is its holy book. Islam is most often practiced in the Middle East, Northern Africa, Central Asia, South Asia, Western Africa, the Indian subcontinent, Malay Archipelago with concentrations of worshipers in Eastern Africa, the Balkan Peninsula, Russia, and China.

Urgent: Do You Approve Or Disapprove of President Obama’s Job Performance? Vote Now in Urgent Poll

For some, Catholicism refers to Christians and churches belonging to the Catholic Church in communion with the Holy See, for others it refers to continuity “back to the earliest churches,” which is claimed by other churches in mutual disputes over Christian doctrine and practice, such as the Eastern Orthodox Church, Oriental Orthodoxy, the Assyrian Church of the East, the Old Catholic Church, and the Anglican Communion.

Top: A press hall attendant holds the curtains adorned with portraits of late Pope John Paul II, left, and John XXIII prior to the start of a news conference at the Vatican on Friday, April 25, 2014.

Bottom: The Faithful walk next to rows of empty chairs in St. Peter’s Square at the Vatican on April 25. Hundreds of thousands of pilgrims and faithful were expected to attend the April 27 ceremony at the Vatican in which Pope Francis elevated in a solemn ceremony John XXIII and John Paul II to sainthood.

Top: Hindus and Sadhus celebrate Diwali (the start of the Hindu New Year) at the BAPS Shri Swaminarayan Mandir, the first traditional Hindu temple to open in Europe, on Nov. 14, 2012, in London.

Middle: Indian Hindu devotees pray before forming a human pyramid to break a dahi-handi, curd-pot, suspended in the air during celebrations of Janmashtami, which marks the birth of Hindu God Lord Krishna in Mumbai on Aug. 10, 2012. Hindu men and boys receive prize money by constructing a human pyramid until it is tall enough to enable the topmost person to reach the pot and claim the contents after breaking it.

Bottom: Hindu devotees bathe in the holy Ganges river during the royal bathing day of Makar Sankranti, the start of the Maha Kumbh Mela on Jan. 14, 2013, in Allahabad, India. The Maha Kumbh Mela, perhaps the largest religious gathering on earth (attracting more than 100 million people) is held every 12 years on the banks of Sangam, the confluence of the holy rivers Ganga, Yamuna, and the mythical Saraswati.

A giant letter “A” representing the atheist and agnostic community sits between a nativity scene and a menorah in Daley Plaza on Dec. 4, 2013, in Chicago. The plaza is also home to the city’s traditional Christmas tree and Christkindlmarket Chicago, a German-themed outdoor market open during the Christmas shopping season. Agnosticism maintains that the truth of certain religious or metaphysical claims — in particular claims about the existence of any deity — is unknown or unknowable.

Two young Buddhist monks are seen in Bagan, Myanmar (Burma). Buddhism originated with Siddhartha Gautama, better known as Buddha (“the awakened one”). Buddha lived in northeastern India between the 6th and 4th centuries BC. The goal of Buddhism is to end suffering, achieve nirvana, and escape a cycle of suffering and rebirth.

David Silverman, president of the American Atheists, addresses the American Atheists National Convention in Salt Lake City on Friday, April 18, 2014. In an effort to raise awareness and attract new members, the organization held their national conference over Easter weekend in the home of The Church of Jesus Christ of Latter-day Saints.

Desmond Tutu, Anglican archbishop emeritus and Nobel Peace Laureate, greets people as he is wheeled away after joining other religious leaders and a wide range of people from civil society on a march called Procession of Witness in defense of the role of the Public Protector, Thuli Madonsela (not visible), in uncovering corruption, as well as protesting violence, and profiteering by people in business and politics, on April 19, 2014, through the center of Cape Town. On Tutu’s left is current Anglican archbishop Thabo Makgoba.

As part of a Christian tradition mostly comprising or tied to the Church of England, Anglicans fully declared their independence from the pope at the time of the Elizabethan Religious Settlement with the Act of Supremacy of 1558.

Fireworks explode over the illuminated Golden Temple, the Sikhs’ holiest shrine, on the festival of Baisakhi in Amritsar, India, on April 14, 2014. Baisakhi, which marks the Sikhs’ New Year’s day is also a harvest festival.

Sikhism was founded in the 15th Century in Punjab, India, on the teachings of Guru Nanak Dev and 10 successive Sikh Gurus (the last one being the sacred text Guru Granth Sahib). The word Sikh derives from the ancient Sanskrit root śiṣya meaning “disciple” or “learner,” or śikṣa meaning “instruction.”

On Feb. 2, 2014, students from Parkview Jr. Academy, a Seventh-day Adventist school, are seen making 700 valentines for homeless people. From left to right are Jared Tamaleaa, 12, Mackenzie Pitcher, 14, and Noah Gloudeman, 15. Seventh-day Adventists (SDA) are a 150-year old Christian denomination that emphasizes the central role of Jesus Christ as personal savior, high priest for all believers, and judge of all humankind. The denomination has no creed but members typically agree to 29 fundamental beliefs that cover core Christian beliefs as well as beliefs differentiating it from other sects.

Top: More than 100,000 Latter-day Saints came to Salt Lake City last month for the church’s biannual general conference. Leaders of The Church of Jesus Christ of Latter-day Saints give speeches providing members with guidance and inspiration in five sessions that span Saturday and Sunday. They announce church statistics, new temples, or initiatives. The 21,000-seat conference center fills to capacity during the sessions, and thousands more listen or watch around the world in 95 languages on television, radio, satellite, and Internet broadcasts.

Bottom: Members of the famous Mormon Tabernacle Choir sing during the opening session of the two-day Mormon church conference.

Judaism stems from the Hebrew Bible, the Tanakh, and is contemplated and explained in subsequent texts such as the Talmud. The laws and commandments of God were revealed to Moses on Mount Sinai in the form of both the written and oral Torah. Karaite Judaism, however, believes that only the written Torah was revealed. Moreover, humanistic Judaism and similar humanistic moments may be considered non-theistic.

Read Newsmax: The 12 Most Popular World Religions and Sects in Images | Newsmax.com