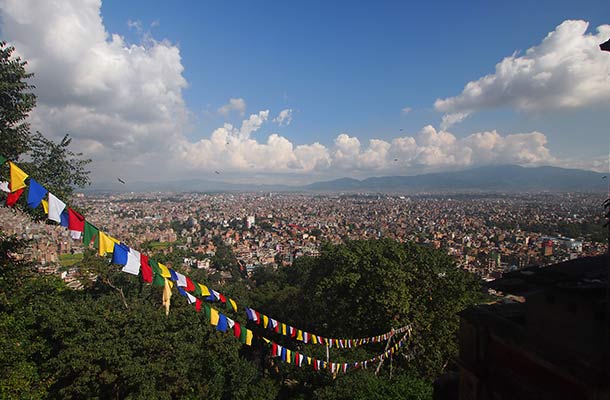 While reminiscent of the traditions of India and China, Nepal has its own distinct cultural flavour.

It would take a long time to visit all of Nepal’s cultural attractions, but many of the country’s top temples and cultural sites are located in or around Kathmandu, making them very accessible.

If you’re traveling around, there are a few must-visit places to learn about traditional culture in Nepal.

It’s nicknamed the ‘monkey temple’ and as soon as you arrive, it’ll soon become clear why as you see monkeys crawling up the stone steps to the temple.

To the east of central Kathmandu, this is considered to be the holiest Tibetan Buddhist site outside of Tibet.

The surrounding area is a hub of Tibetan life and culture in Nepal and is a must-see destination if you’re visiting Kathmandu.

This is the least-visited of all of Kathmandu Valley’s heritage sites, but is a shame to miss.

The two-story Vishnu temple at the top of the hill is said to be the oldest temple in Nepal, and represents a turning point in Nepali architecture and culture.

Located on the northern edge of the valley, this is a unique place, as the large stone Vishnu statue is depicted lying in a pool of water surrounded by serpents.

You can combine a trip here with a walk in the nearby Shivapuri National Park, further up the hill.

This Kali temple, on the southern edge of the Kathmandu Valley, is where animal sacrifices (especially of goats and chickens) are made.

Only visit here if you’re not squeamish at the sight of blood.

This is Nepal’s most holy Hindu site. Located on the banks of the Bagmati River that runs through Kathmandu, it’s always abuzz with pilgrims and sadhus (Hindu holy men).

This is a place of somber worship, as Pashupatinath is also the city’s most important cremation ground.

From the highway town of Kurintar, located on the Trisuli River between Kathmandu and Pokhara, is a long and scenic cable car leading up to the Manakamana temple.

Although the temple itself is being rebuilt after destruction in the 2015 earthquake, it still attracts many pilgrims from around India and Nepal, who believe their wishes will be granted if they pray here.

The ride up on the cable car is stunning and makes for a fantastic day trip from Pokhara or Kathmandu.

This Hindu and Buddhist pilgrimage site is located deep (and high) in the mountains, at 3710m.

As well as pilgrims, trekkers in the Mustang and Annapurna region of the Himalayas frequently make the trip here.

While at one of the Durbar Squares, you might be lucky enough to spot the Living Goddess. The Newari people worship a young girl believed to be the incarnation of the goddess Taleju.

Each of the major old kingdoms of the valley have their own living goddess. She is usually hidden away inside, but during major festivals makes an appearance in the Durbar Squares.By Elen Turner,