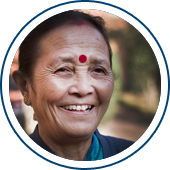 Anuradha Koirala, lovingly called Dijju (elder sister) was born on 14th April 1949 to Colonel Pratap Singh Gurung and Laxmi Gurung. She was educated at a hill station in Kalimpong, India. It was here that the Mother and Sisters at St. Joseph Convent School further increased her devotion towards social work.

Mother Teresa has always been her largest source of inspiration. She spent more than 20 years teaching children at various schools around Kathmandu. Even though this brought her great satisfaction she realized that she had a bigger personal calling to fulfill. Children, girls and women were being trafficked within and from Nepal for commercial sexual exploitation. Therefore, in 1993, Ms. Koirala founded Maiti Nepal with the aim of providing services for both children and women who have endured untold pain and suffering, often in silence.

After establishing Maiti Nepal, she plunged into the service of humanity. Her first work was setting up of a home so that she could provide an abode to those who have nowhere else to turn to. Now, Maiti Nepal has three prevention homes, eleven transit homes, two hospices and a formal school. More than 1000 children are receiving direct services from Maiti Nepal every day. It was all made possible with her firm determination and unprecedented leadership.

So far, Anuradha Koirala has been awarded 38 national and international awards in recognition of her courageous acts and achievements furthering the cause of children’s and women’s rights. Some of the national and international awards include; Prabal Gorkha Dakshin Bahu Medal- Nepal 1999, Trishaktipatta Award 2002, Best Social Worker of the Year Award- Nepal 1998, German UNIFEM Prize 2007, Queen Sofia Silver Medal Award 2007, The Peace Abbey, and Courage of Conscience 2006. Her achievements include liberating girls from brothels, providing ART before the government of Nepal could initiate this process. Due to her continuous struggle, Government of Nepal now recognizes 5th September as an anti- trafficking day. Ms. Koirala was also appointed as a former Assistant State Minister of Women Children and Social Welfare as an honor to her contributions.

Ms. Koirala loves spending time with children; they say that they get warmth of mother and a father from her. She is self-motivated person relishing new and dynamic challenges with a leadership role in a team environment or independently.

In 2010 she was declared as CNN Hero. It was the result of her struggle and compassion to fight the social evil of human trafficking. Her victory as CNN hero is a pride and honor to the nation itself.