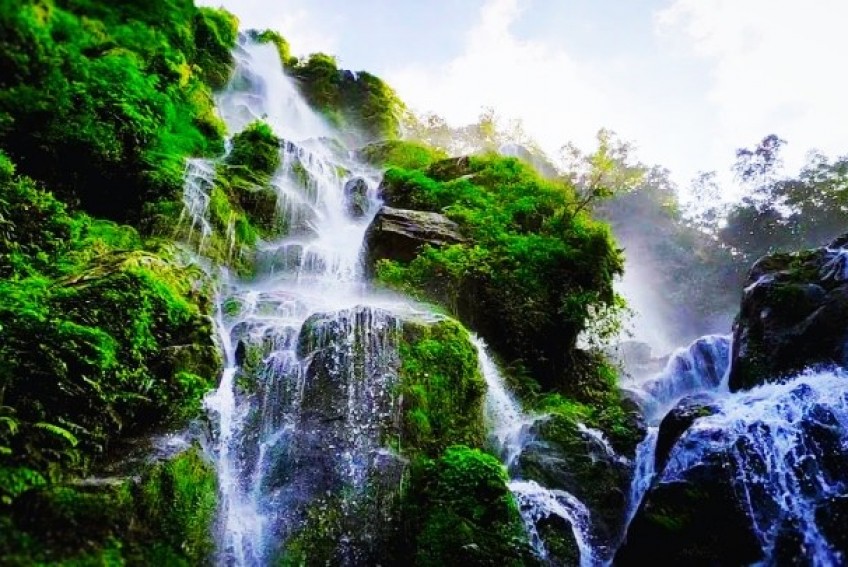 Surrounded by snowy peaks, incredible landscapes, and impressive mountains, Nepal is a country that has culture, adventure and beauty rolled into one.

Nepal the paradise for nature buffs and adventurous souls who are looking for an escape from a hectic life to the lap of nature is a beautiful country blessed with nature’s choicest attractions.

Surrounded by snowy peaks, incredible landscapes, and impressive mountains, Nepal is a country that has culture, adventure and beauty rolled into one. This dreamland is a paradise that people look forward to visiting every year.

While in this magnificent country, trek up to the mountain and explore these 6 exoticwaterfalls in Nepal which are settled amidst the vicinity of lush green mountains.

Pachal Jharna in Kalikot district of Karnali province is the pride of Nepal. Located at an altitude of 970 meters above sea level, this waterfall is also considered as a mountain, hard rock, Lekali plain and important religious and tourist site.

It is not only the waterfalls that cascade down there, but also the view of the towering mountains and beautiful hills that offers a different kind of joy and energy to the tourists. This waterfall was formerly known as Bhutini Chahara by the locals.

Passing through the Kali Gandaki Gorge which is the world’s deepest canyon, the Rupse Waterfall is the highlight attraction of Myagdi district of Nepal.

The waterfall falls from an altitude of 300 meters and is considered one of the most beautiful natural wonders of Nepal. However, in the last few decades, the situation of the gorge has suffered, but the beauty of the place remains undaunted. Located exactly on the Beni-Jomsom highway this waterfall is something that you cannot just pass by without stopping to enoy it.

This waterfall lies between a green forests which can captivate anyone who has been there. If you are lucky then you can view the rainbow around the waterfall.

Hyatung waterfall is the highest waterfall in Nepal and the second-highest waterfall in Asia after Kunchikal waterfall (455m). Hyatung Falls has a height of 365 meters and the scenic beauty of this is heartwarming making it a beautiful place for a hike, and nature watch. If you are lucky then you can view the rainbow around the waterfall.

Offering a thrilling trail to hike and triumph over heights, Annapurna Roadside waterfall is a paradise for adventure junkies. It gives a panoramic view of the Himalayan ranges and is on one of the most famous trails in the world.

The Annapurna area is portrayed by snowcapped knolls, tumbling cascades, pine timberland and the immense presence of Annapurna. It is one of the acclaimed trails on the planet and offers a beautiful perspective on the Himalayan reaches. Seeing the Annapurna Roadside Waterfalls will without a doubt leave you entranced.

Located at the Pokali VDC of Okhaldhunga Nepal, this gigantic and magnificent waterfall falls from a height of 130 meters. It is considered to be a religious site and locals often refer to this area as “Dughdeshow Mahadev”.

During the rainy season, its beauty is unimaginable and will makes you forget all your worries. It is also considered very suitable for canyoning in the spring season from April to May. Pokali waterfall, located in Likhu rural municipality-9, Okhaldhunga, has been listed in the top 100 destinations in Nepal.

Tindhare Jharana, widely known as BahuBali Jharana, is located in the Roshi municipality in Kavre district. It is located exactly in the Kaphal danda of kavre, east of Kathmandu.

Its new name ‘Bahubali’ evolved from the waterfall scene of the movie Bahubali which looks exactly alike the Tindhare Jharana. This waterfall is around 300m tall. The natural beauty and stunning views of this fall and its surrounding make it a must-visit place in Nepal. The waterfall gets its name from the fact that it is made from three streams.

The best time to visit is March to May. Monsoon season adds to the beauty of the waterfalls increasing the water volume and automatically making you want to be beneath it and enjoy the fresh splash.